Jayalalitha and Shasikala were Lesbian: Truth Vs. Hype

One of the most intriguing relationships in the political history of India is between Late J. Jayalalitha and Sasikala. People still wonder what was there in Sasikala which compelled Jayalalitha to bestow complete trust on her. If you remove few months of hiatus when Sasikala was removed from AIADMK, the relationship between them had always been strong as well as mysterious.

Two reasons have always been given by people in the know behind this intriguing chemistry between them. The first one is the financial angle. People say that Jayalalitha had been trapped in a sort of financial web by none other than Natarajan and it had become tough for her to get out of this. The DA case kept on hovering over Amma’s head which sometimes threatened to kill her political future.

The other reason is quite personal – which had mainly provided by DMK leaders. That is the sexual angle – J. Jayalalitha and Shasikala were lesbians. We will try to explore this angle here. 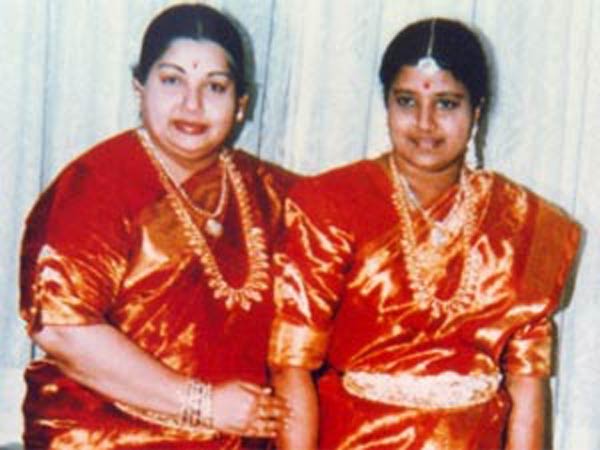 Were Shasikala and Jayalalitha Lesbian?

And, people again started to blame that Jayalalitha couldn’t live without her sex partner Shasikala and hence this forgiveness was just an orchestrated drama.

The root of this allegation goes back in the late 1990s when a letter allegedly written by Jayalalitha to her personal physician came in the public forum. In this letter, Jayalalitha had disclosed about her sexual relationship with Shasikala. DMK linked people started to raise their voices based on this letter and asked for clarification from Jayalalitha.

That was a sort of heinous campaign meant to malign the character of a woman who was fighting all odds to shine in a predominantly patriarchal society.

On their parts, both Jayalalitha and her personal doctor had denied the existence of any such letter.

In a famous interview with Simi Grewal, Jayalalitha had said that she never thought any need to vociferously reply to these types of stupid and scandalous allegations.
It should also be noted that once Karunanidh had said that – A pious, Pure and chaste lady is talking about purity of Late Maran. Actually, few days back, Jayalalitha had said that Maran wasn’t as such a pious man that his statue can be erected in any corner of Tamil Nadu. Karunandhi had replied to this statement of Amma and clearly his sarcastic words like pious, pure and chaste were meant to malign the character of Jayalalitha.

In any case, there isn’t any proof in the public forum about the lesbian relationship between Jayalalitha and Shasikala.

Popular posts from this blog

Neetu Singh is one of the most prominent names in the coaching industry of India. She has single handedly created an empire like Paramount. When she was thrown out of her own creation in the most humiliating way, she started another coaching platform named K. D. Campus. She has also launched many startups like Rishta Milega and K. D. Publications, among others. The Indian coaching industry has ample space for many competitors in almost all arenas, like UPSC Civil Services, SSC, Banking, Engineering, GATE, etc. K. D. Campus has become a pioneer in the field of SSC and other Grade B and C Government jobs. The credit goes to Neetu Singh. Following is the brief wiki and biography of Neetu Singh: Real Name:  Neetu Singh ………………………………… Nick Name:  Neetu Maa’m ………………………………… Date of Birth:  ………………………………… Age:  ………………………………… Father:  Kishore Dev Singh. She has taken K. D. Campus name from her father Kishore Dev who died when she was only 3 years old. She is t
1 comment
Read more

Sara Tendulkar is an Internet sensation ever since her appearance in the last test match of Sachin in 2013. Indian youngsters are following all of her moves. It is quite natural then that gossip writers also give time to make fabricated and sensational stories about her. She was hooked up with Shubnam Gill, which seems to be now over. Recently, she had posted a pic of her kissing an unknown guy on her Instagram account. Few minutes later, she had deleted the pic. You can see it here: The attention Sara is getting can’t be termed as just a onetime affair. She is all set to stay here in the limelight. She may not join the Bollywood. She may not become a model. She is also not interested in playing any sort of sports. But, still, she is here to stay. Take a look on some of the hot pictures of Sara. These images give a glimpse of the hotness this young chap is endowed with. Sara Tendulkar Hot Photoshoot Sexy Sara Tendulkar Smiling Sara Tendulkar Sexy Image Sara Te
Post a Comment
Read more

Jatin Mehta is the promoter of Windome Diamonds Pvt. Ltd. (formerly known as Su Raj Diamonds). He is one of the biggest defaulters in the history of India. In real terms, he defaulted more than that of Vijay Mallya. However, the focus of media remains on Mallya because of his popularity and lavish lifestyle (which gave media instant TRP). Jatin remained untouched. Jatin got more than Rs. 5000 crores of loan from various Public Sector Banks from 2010 to 2012. He defaulted and was declared willful defaulter at the end of 2013. CBI and Enforcement Directorate started investigation. However, these two agencies couldn’t do anything to Jatin. Jatin became a citizen of St. Kitts and Nevis in 2015. This small country is known as a tax heaven and India doesn’t have an extradition treaty with this country. Hence, it is virtually impossible to bring back Jatin. Nirav Modi is also thinking about going through the same pattern to keep off CBI hooks. Indian Banks did got som
Post a Comment
Read more

Dr. Renu Raj is an IAS officer of Kerala cadre. She is widely regarded as the rising star among best and most efficient IAS officers of India. In a very short span of time, she has been getting appreciation from wide range of people for her decisive action and upright administrative decisions. India Today has also ranked her among top 10 most efficient government officers of India.  Being honest means also being targeted by politicians and corrupt bureaucrats. She was recently made the Sub Collector of Devikulam, a scenic area known for tourist activities as well as for illegal constructions. She was abused and publicly shamed by the local CPM MLA Mr. S. Rajendran. True to her fighting spirit, she didn’t buckle down under the pressure. In fact, the MLA had to apologize, though   halfheartedly . Few months later, she was transferred out of Devikulam. In fact, she is 16th IAS officers who have been removed from this area in the last nine years. You can call all of them as crud
Post a Comment
Read more

Akunuri Murali was an IAS officer of Telangana cadre. He had taken voluntary retirement from the IAS without citing any reason. However, off the record, he had clearly said that he was being discriminated at the highest level because of him being an SC/Dalit.  Now, this is a very serious charge. If a senior IAS officer can feel and experience caste discrimination, then what hope a common man should have from political executive of the state? Akunuri Murali was the DG of State Archives. He was at this post for around two years. And, there is not an iota of doubt that this is a perfectly shunting post for honest officers. One doesn’t need to do anything at this post. He has created a storm on social media in June 2022 by saying that all posts where huge bribes can be made are always given to civil servants belonging to upper castes. Following is the brief wiki and biography of Murali : Real Name:  Akunuri Murali ………………………………… Nick Name: Akku Garu ………………………………… Da
Post a Comment
Read more

Jagrati Shukla is one of the most fearless female journalists of India. She has stamina and valour to call a spade a spade. Some of her remarks had become quite controversial. However, majority of those so called controversial statements turned out to be correct. She was abused by Leftists, AAP supporters and Congress followers for her outbursts against anti national  ideologies. Jagrati Shukla was recently appointed by Lok Sabha TV as its consultant. It is heartening to note that the national TV channel has recognized the real talent. It may be noted here that Jagrati Shukla has been abused, threatened and hounded on social media. If you want to see how Leftists and liberals abuse a woman, scroll down on Jagrati’s Twitter Timeline and read some replies. Fortunately, she has fought against all these hate mongers. Twitter being controlled by Leftists, couldn't stand her bold statements and she was permanently banned. Her account may get reinstated after the take o
1 comment
Read more

Durgesh Pathak is a prominent Aam Aadmi Party (AAP) leader. He is currently AAP MLA from the prestigious Rajendra Nagar constituency. At a very young age, he has emerged as a successful organization builder for the party.  He has become a close confidant of Supreme leader Arvind Kejriwal. For any decision regarding Punjab, the party follows opinions of Durgesh Pathak. Such is the charisma of this young leader that many senior AAP leaders are becoming increasingly jealous to him. Ashutosh doesn’t like him being termed as ‘ the Next Arvind Kejriwal ’. Profile of Durgesh Pathak Durgesh Pathak was born on August 3 rd , 1988 in Sikohara village of Gorakhpur district, Uttar Pradesh. He did schooling from Government Inter College, Basti. Later, he had shifted to Allahabad for higher education from where he completed Graduation and PG. He has done M.A. in English Literature.  During Graduation, he was thinking about preparing for UPSC Civil Services Examination. However, so
Post a Comment
Read more

Inayat Khan is a 2012 batch IAS officer of Bihar cadre. She is currently posted as the DM of Araria district. Previously, she was  the DM of Sheikhpura for quite a long duration. In fact, she has been at the helm of district headquarters for majority part of her career. Inayat Khan, IAS officer Inayat Khan is known as a no nonsense and highly ethical officer. In a career spanning around one decade, she was never accused of being involved in any sort of wrong doing. She is also famous for her social work. Inayat Khan, IAS Following are some profile details of Inayat: Personal Life: Name: Inayat Khan Nick Name: Innu Date of Birth: 17 th May, 1987 Age: 35 Years Birthplace: Agra, UP Father: Mother: Educational Qualification: -          B. Tech. from Anand Engineering College Relationship Status: Married. News and Controversies: Inayat had cracked UPSC Civil Services Examination in 2011 with All India Rank of 176. Because of her category and the prevailing roost
1 comment
Read more

Rema Rajeshwari is creating news for her positive initiatives in Telangana. She has worked in various assignments and everywhere people remember her for being utterly honest, neutral and following professional ethics, among others. In fact, she has become a role model for teenage girls of Telangana. Known for changing the very nature of policing, the innovative approach of Rema has become a case study at National Police Academy, Hyderabad. Rema Rajeshwari, IPS Profile of Rema Rajeshwari Rama was born in the Tea Estate of hills of Munnar of Kerala. She did her initial schooling from Tata run school of Munnar and later took admission in Alphonso College, Kattayam. She has also done M. Tech from Mahatma Gandhi University, Kerala. At that time, she didn’t had any plan to join the Civil Services. Actually, she went to Delhi for some official assignment. At that time, she thought about doing PG Diploma from Indian Institute of Human Rights – IIHR. At IIHR, she came to know a
Post a Comment
Read more